“South Korea and NATO Should Work Together to Resolve the North Korean Nuclear Issue.”

[Abrial, former NATO Supreme Allied Commander] Having served as the commander for the first time as European general… praised a leading US Defense Secretary candidate Mattis “I wish a win-win cooperation with the Korean Defense Industry”

“Even though Korea is not a member of NATO (North Atlantic Treaty Organization), it has been making cooperation as a global partner. Both Korea and NATO need to keep a closer relationship in order to resolve North Korean nuclear issues.”  General Stéphane Abrial (62), who was the first non-American to be appointed as the NATO Supreme Allied Commander in 2009, emphasized the importance of Korea-NATO partnership during an interview with Chosun Ilbo on November 24th. Subsequently to his first visit to Korea in 2000, former commander Abrial paid his second visit to Korea and stated, “The relationship between Korea and NATO grew intimate with the speech made by Ban Ki-moon, who was the Minister of Foreign Affairs, at the North Atlantic Council (the principal political decision-making body within NATO) 10 years ago in 2006,” and added, “Korea’s dispatch of the PRT Force, Ashena Unit and dispatch of the Cheonghae Anti-piracy Unit to Somalia are good examples of Korea’s joint activity with NATO.”

He got a lot of attention after being appointed to the Supreme Allied Commander Transformation, which is one of the two NATO Supreme Allied Commanders, for the first time as a European general. The post is in charge of making short-term and long-term innovation agendas for the army of 28 member countries. Before him, the US Army used to monopolize the post of two NATO Supreme Allied Commanders. At that time, he became the talk of the town after he was appointed, instead of a general of the British Army which is an ally of the US. Former NATO commander Abrial said, “After France withdrew from NATO in 1966, it joined NATO again after a heated debate, and subsequently, non-American general took up the post of one commander among the two” and then added, “England did not like me being appointed to the commander.”

His predecessor was James N. Mattis who was US Marine Corps Commander at that time and now a promising US defense secretary candidate at the present time. Regarding general Mattis with the nickname ‘Mad Dog,’ he commented, “He is an excellent military official,” and added. “After leaving his post, general Mattis took up the US Commander of Joint Forces Command in Norfolk, Virginia where I worked, so we kept friendship.” He held his inaugural ceremony on the nuclear-powered aircraft USS Dwight D. Eisenhower, which is named after the US president Eisenhower who was the first NATO Supreme Allied Commander.  Former NATO commander Abrial is also widely known as a five-star general in France. The post of French 5-star general which is equivalent to Korea’s 4-star general is assigned to the top military commanders who have actual combat experiences. Abrial is a veteran pilot who has a record of 4300 flight hours and has two actual combat experiences such as his participation in the Gulf War in 1991. During the Gulf War, he led 45 aircrafts, 70 pilots and 1,000 backup forces. Having personally operated Mirage 2000 combat Fighter, he professed, “I participated in a large combat for the first time as French Air Force. I learned a lot from the combat. However, it was the most difficult combat which continued for 43 days.”

After his retirement in 2012, former NATO commander Abrial joined Safran, a leading French Aerospace Defense Group the following year and works as Senior Executive VP at the present time. He said, “As I was a NATO Supreme Allied Commander Transformation, I have great interest in innovations in the business field, and my current life is very exciting,” and added “By using my export experiences with the French industry such as Safran, I would like to form a win-win cooperation with the Korean defense industry.” 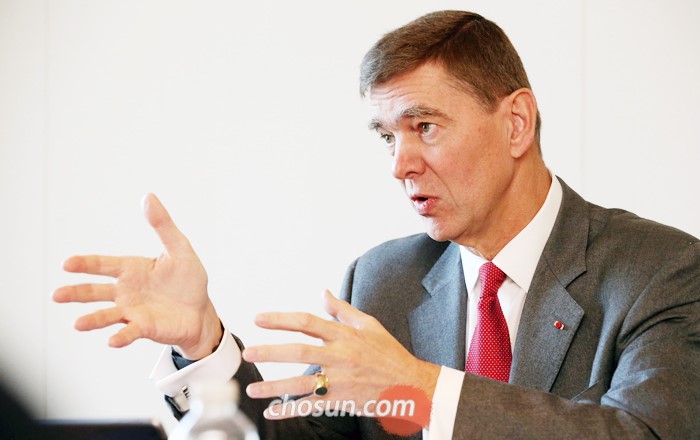 Please click here to read the article in Korean.