ECCK Chairman Dimitris Psillakis “Korea, a country that is good for business”

“Korea is a good business partner. Korea’s GDP per capita is reaching USD 30,000. Its econmy is growing very fast, despite the fact that the country has very few natural resources and constantly deals with issues with its neighboring countries.”

On October 30, Dimitris Psillakis, Chairman of the ECCK, expressed his trust in the Korean market in an interview with the newspaper. Chairman Psillakis, also the President & CEO of Mercedes-Benz Korea, stressed the importance of maintaining the strategic relationship between EU and Korea while pointing out the close business ties between the two parties.

“We need to have predictability of the market in order to do business,” Psillakis said. He has worked in many parts around the world such as Germany, England, and South America. “In Latin America, natural resources are abundant and growing, but there is a lot of fluctuation,” he said. “In comparison, Korean market is mature but also has the potential for growth at the same time.”

Chairman Psillakis stated that the EU and Korea has built a close relationship where the trade growth rate marks 30%. At the same time, he said the EU could be a great role model for Korea. “I think the European market is mature than any other markets around the world. Above all, Europe has a good level of capacity to handle problems in a crisis. There are problems that are still ongoing throughout the EU, but when looking at how the issues with Greece and Spain are proceeding smoothly, it signifies EU’s competitiveness”.

The Chairman also suggested that the European SME model can make a good model for Korea. “The Korean economy depends heavily on big companies,” said Psillakis. “Business associations in Europe can be a good example,” he said. “Small businesses can make a model of strong European SMEs and develop the SME ecosystem in Korea.” He emphasized that the two countries should complement each other and strengthen the relationship. 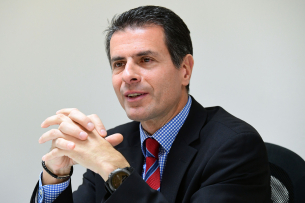 ECCK Chairman Dimitris Psiallakis during the interview with Etoday
Posted in All News, ECCK in the Media, ECCK News.
Share