An interview article with ECCK Chairperson Dirk Lukat was published in Korea JoongAng Daily on July 6. In the interview, Chairperson Lukat evaluates the trade relation between EU and Korea in the past 10 years and discusses the necessity to update the EU-Korea FTA.

Below is the published article: 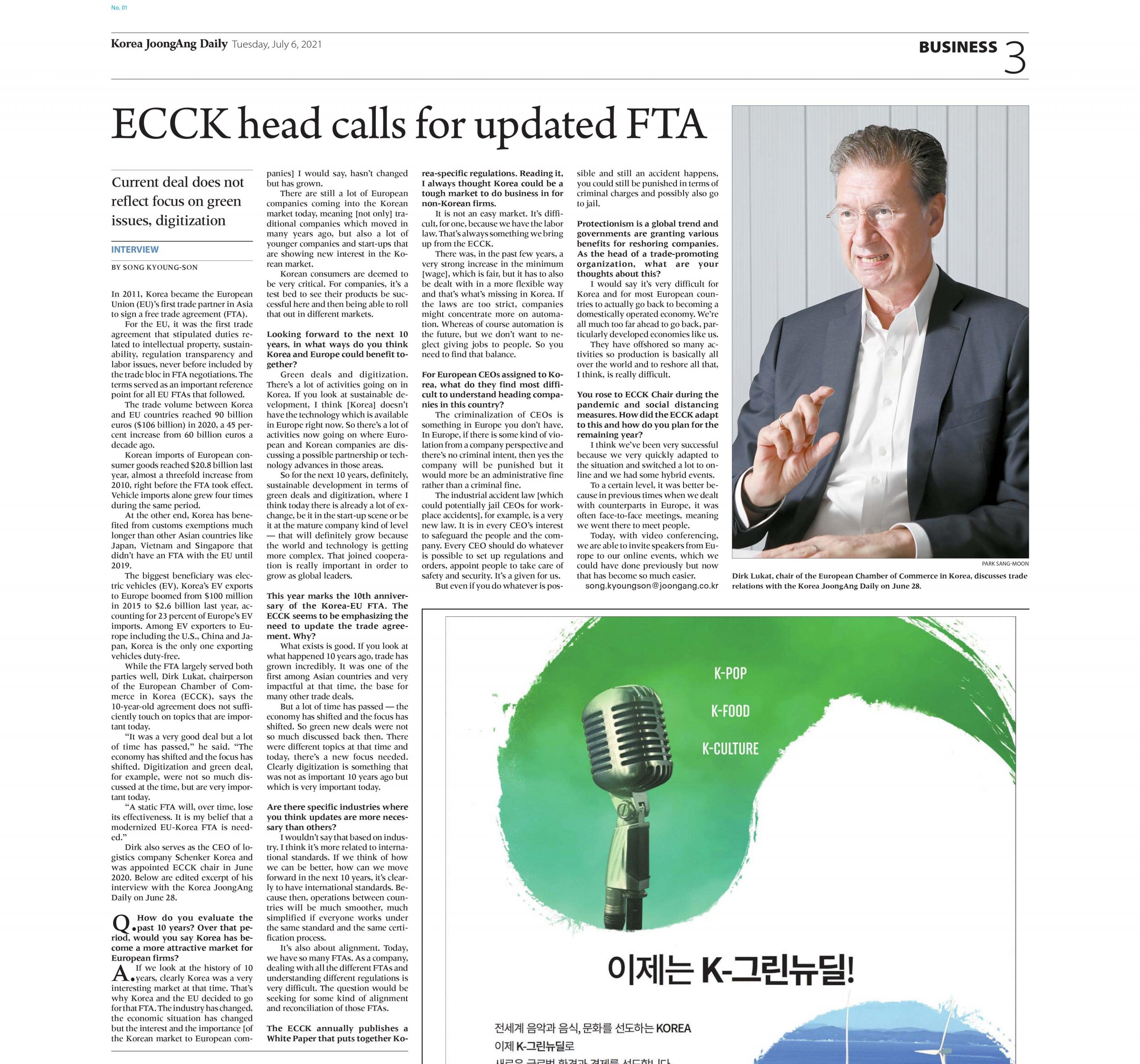 For the EU, it was the first trade agreement that stipulated duties related to intellectual property, sustainability, regulation transparency and labor issues, never before included by the trade bloc in FTA negotiations. The terms served as an important reference point for all EU FTAs that followed.

The trade volume between Korea and EU countries reached 90 billion euros ($106 billion) in 2020, a 45 percent increase from 60 billion euros a decade ago.

At the other end, Korea has benefited from customs exemptions much longer than other Asian countries like Japan, Vietnam and Singapore that didn’t have an FTA with the EU until 2019.

The biggest beneficiary was electric vehicles (EV). Korea’s EV exports to Europe boomed from $100 million in 2015 to $2.6 billion last year, accounting for 23 percent of Europe’s EV imports. Among EV exporters to Europe including the U.S., China and Japan, Korea is the only one exporting vehicles duty-free.

While the FTA largely served both parties well, Dirk Lukat, chairperson of the European Chamber of Commerce in Korea (ECCK), says the 10-year-old agreement does not sufficiently touch on topics that are important today.

“It was a very good deal but a lot of time has passed,” he said. “The economy has shifted and the focus has shifted. Digitization and green deal, for example, were not so much discussed at the time, but are very important today.

“A static FTA will, over time, lose its effectiveness. It is my belief that a modernized EU-Korea FTA is needed.”

Dirk also serves as the CEO of logistics company Schenker Korea and was appointed ECCK chair in June 2020. Below are edited excerpt of his interview with the Korea JoongAng Daily on June 28.

Q. How do you evaluate the past 10 years? Over that period, would you say Korea has become a more attractive market for European firms?

If we look at the history of 10 years, clearly Korea was a very interesting market at that time. That’s why Korea and the EU decided to go for that FTA. The industry has changed, the economic situation has changed but the interest and the importance [of the Korean market to European companies] I would say, hasn’t changed but has grown.

Korean consumers are deemed to be very critical. For companies, it’s a test bed to see their products be successful here and then being able to roll that out in different markets.

Q.  Looking forward to the next 10 years, in which areas do you think Korea and Europe could benefit together?

So for the next 10 years, definitely, sustainable development in terms of green deals and digitization, where I think today there is already a lot of exchange, be it in the start-up scene or be it at the mature company kind of level — that will definitely grow because the world and technology is getting more complex. That joined cooperation is really important in order to grow as global leaders.

Q. This year marks the 10th anniversary of the Korea-EU FTA. The ECCK seems to be emphasizing the need to update the trade agreement. Why?

What exists is good. If you look at what happened 10 years ago, trade has grown incredibly. It was one of the first among Asian countries and very impactful at that time, the base for many other trade deals.

But a lot of time has passed — the economy has shifted and the focus has shifted. So green new deals were not so much discussed back then. There were different topics at that time and today, there’s a new focus needed. Clearly digitization is something that was not as important 10 years ago but which is very important today.

Q. Are there specific industries where you think updates are more necessary than others?

I wouldn’t say that based on industry. I think it’s more related to international standards. If we think of how we can be better, how can we move forward in the next 10 years, it’s clearly to have international standards. Because then, operations between countries will be much smoother, much simplified if everyone works under the same standard and the same certification process.

It’s also about alignment. Today, we have so many FTAs. As a company, dealing with all the different FTAs and understanding different regulations is very difficult. The question would be seeking for some kind of alignment and reconciliation of those FTAs.

Q. The ECCK annually publishes a White Paper that puts together Korea-specific regulations. Reading it, I always thought Korea could be a tough market to do business in for non-Korean firms.

It is not an easy market. It’s difficult, for one, because we have the labor law. That’s always something we bring up from the ECCK.

There was, in the past few years, a very strong increase in the minimum [wage], which is fair, but it has to also be dealt with in a more flexible way and that’s what’s missing in Korea. If the laws are too strict, companies might concentrate more on automation. Whereas of course automation is the future, but we don’t want to neglect giving jobs to people. So you need to find that balance.

Q. For European CEOs assigned to Korea, what do they find most difficult to understand heading companies in this country?

The criminalization of CEOs, which is something in Europe you don’t have. In Europe, if there is some kind of violation from a company perspective and there’s no criminal Intent, then yes the company will be punished but it would more be an administrative fine rather than a criminal fine.

The industrial accident law [which could potentially jail CEOs for workplace accidents], for example, is a very new law. It is in every CEO’s interest to safeguard the people and the company. Every CEO should do whatever is possible to set up regulations and orders, appoint people to take care of safety and security. It’s a given for us.

But even if you do whatever is possible and still an accident happens, you could still be punished in terms of criminal charges and possibly also go to jail.

Q. Protectionism is a global trend and governments are granting various benefits for reshoring companies. As the head of a trade-promoting organization, what are your thoughts about this?

I would say it’s very difficult for Korea and for most European countries to actually go back to becoming a domestically operated economy. We’re all much too far ahead to go back, particularly developed economies like us.

They have offshored so many activities so production is basically all over the world and to reshore all that, I think, is really difficult. Electric cars, autonomous driving and semiconductors, for example, cannot be formed by one single company or one single country. They always require the intelligence and cooperation of different parties.

Q. You rose to ECCK Chair during the pandemic and social distancing measures. How did the ECCK adapt to this and how do you plan for the remaining year?

I will say that human beings are very flexible. Everybody kind of adapted to that new environment and accepted that it was a different situation. For the ECCK, I think we’ve been very successful because we very quickly adapted to the situation and switched a lot to online and we had some hybrid events.

To a certain level, it was better because in previous times when we dealt with counterparts in Europe, it was often face-to-face meetings, meaning we went there once a year to meet people. Today, with video conferencing, we are able to invite speakers from Europe to our online events, which we could have done previously but now that has become so much easier.

Probably I believe we won’t go back to the same amount of travel that we might have had before, at least not in the immediate future. But we definitely need some kind of communication on a face to face basis.