A leading driver and strong advocate for European Businesses in Korea
On March 15, the ECCK organized a seminar on the topic of Standard Essential Patents (SEPs’), patents that protect technology essential to complying with a certain, often technical, standard. The seminar featured speakers from government, industry, and academia and was attended by 50 participants.
By way of introduction, Mr. Jangsik Choi, Principal Engineer at ETRI shared figures about the number of SEPs globally and which companies own these.  After explaining about the pooling of SEPs and the licensing of such, Mr. Choi briefly addressed a number of anti-trust enforcement cases handled both abroad, as well as by the Korea Fair Trade Commission.
Representing one of the largest European SEP holders, Ms. Monica Magnusson, VP of IPR Policy at Ericsson shared the company’s experiences in the development and licensing of SEPs, with a particular focus on cellular standards.  Ms. Magnussen explained that successful, open innovation on a global scale in the field of cellular standards has continuously been enabled by licensing based on Fair, Reasonable And Non-Discriminatory (‘FRAND’) terms, establishing a virtuous cycle.
In order to provide a different perspective on the licensing of SEPs, Prof. Euee Sun Jang of Hanyang University’s Department of Computer Science presented on royalty-free standards.  He took the example of the Moving Picture Experts Group, that has set a number of royalty-free standards, for example relating to internet video coding. Prof. Jang concluded that it would be beneficial for future video coding patents to be licensed on a royalty-free basis.
Following Mr. Choi’s brief mention of antitrust enforcement at the start of the seminar, Prof. Hwang Lee of Korea University’s School of Law presented on recent trends of antitrust enforcement over SEPs.  After introducing the main considerations, he addressed cases in Europe, Korea, the United States and China, touching upon the difficulty in defining what are considered FRAND terms.
Dr. Pierre Régibeau, Vice President at Charles River Associates provided an economic view on standardization.  He explained the economic benefits of standardization and addressed issues such as parties disagreement about SEPs prevalence, deciding on an appropriate level for charging royalties within the value chain and the burden that multiple royalty obligations for various functionalities places on users (royalty stacking).
The last presentation was provided by Dr. Jan Schmitz, Policy Officer at the Directorate-General for Trade at the European Commission.  In his view standardisation is of essential importance given that it is one of the main elements enabling globalisation.  Successes in Europe were achieved due to the public private partnerships, especially in the field of telecommunications due to the establishment of the European Telecommunications Standards Institute (ETSI), an independent, not-for-profit, standardization organization.  Setting the scene for the panel discussion, Dr. Schmitz mentioned three fundamental points that need to be addressed in order to further policy development in Europe.  These are (1) the level of provided transparency, (2) the definition of FRAND terms, and (3) the predictability of the enforcement environment.
The seminar ended with an animated panel discussion during which the speakers engaged with the audience on their presentation and various additional topics including rejected patents, unwilling licensees, and avoidance of litigation. 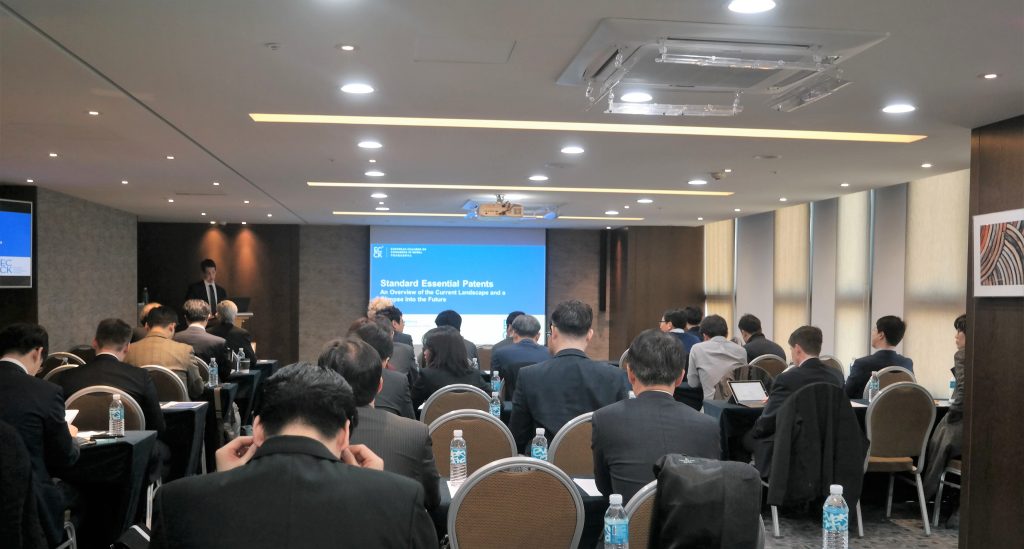