With the strong foundation of commercial and investment partnership between Europe and Korea, the ECCK has been raising the difficult issues with the Korean government, actively engaging in ongoing dialogue with the related authorities about the business climate, transparency, and necessity of reforms in various sectors of the economy.

ECCK White Papers are published annually by the Chamber and comprise of a collection of industry-specific issues and recommendations from the European business perspective on how to improve the business environment in Korea for the benefit of investors, society, and economy. The papers primarily address the Korean government, but also serve to inform the European Commission, European Free Trade Association and the governments of European member states. The ECCK White Paper echoes the European business community’s desire to support the Korean government to develop the current regulatory framework, which will benefit both foreign companies and the Korean economy as a whole.

The ECCK White Paper 2018 is formulated by members of the ECCK’s 14 industry committees, representing the interests of 350 companies. The publication forms the basis for an ongoing and intensive dialogue between the ECCK and the Korean government and the ministries. The constructive recommendations advocated in the White Paper not only address European business interests, but also those of Korean companies by covering issues such as the harmonization of Korea’s regulatory environment with international standards. The paper further address issues affecting the Korean people, including economy, employment, the environment and the quality of life.

After the release of the 2018’s White Paper last November, the ECCK received feedbacks on the 123 recommendations from the Korean government in April 2019. Since the publication of ECCK White Paper 2018, the following progress has been made:

This is ECCK’s first time receiving an official consolidated feedback on the White Paper by the Korean government. ECCK is pleased to announce that over 40% of the proposals have received positive response (accepted, partially accepted, already implemented) from the government.

ECCK Committees and its member companies will continue further communication with the Korean authorities in regard to the recommendations that are not accepted or under long-term review. The Chamber truly appreciates the Korean government’s continued and concerted effort in shaping a better investment environment, creating new jobs and generating economic growth in Korea. 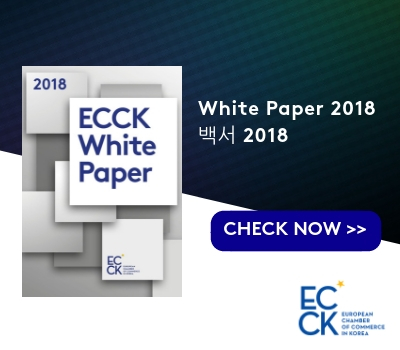