A leading driver and strong advocate for European Businesses in Korea
An interview with ECCK Chairperson Dimitris Psillakis was published in Economy Chosun on December 16. To read the full article, please click on the following link: [Interview] 디미트리스 실라키스 주한유럽상공회의소 회장
Below is the English translation of the interview article. 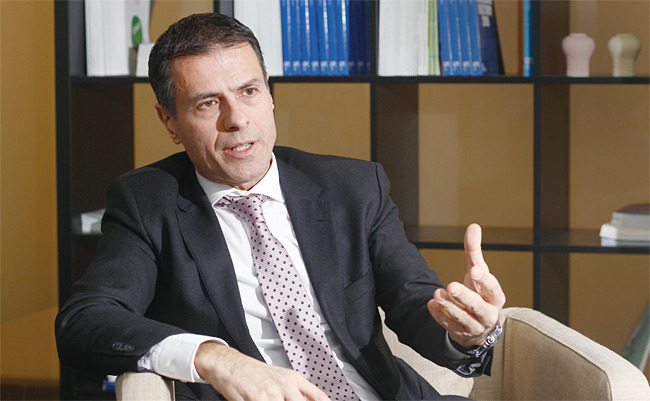 [Interivew] Dimitris Psillakis, ECCK Chairperson: “Regulatory improvement is a ‘win-win’ for government and business”…same for Tada

“You need a sufficient adjustment period before policy enforcement. Balancing the pros and cons of regulation in order to maintain industry competitiveness”

Dimitris Psillakis, Chairperson of European Chamber of Commerce in Korea (ECCK), said during the interview with Economy Chosun on December 5 at ECCK Office located in Jung-gu, Seoul.

Chairperson Psillakis came to Korea when he became the CEO of Mercedes-Benz Korea in September 2015. After three full years, he extended his term, thanks to good business results. Mercedes-Benz Korea, which was the second-largest car sales in the Korean imported car market, rose to the top position after Chairperson Psillakis took office. Since 2017, he has been an elected Chairperson of the ECCK. The ECCK gathers opinions from 360 European companies, representing total sales of 71 trillion won and 50,000 employees. Chairperson Psillakis also spoke to President Moon Jae-in at the invitation meeting for foreign-invested companies presided at the Blue House on March 28, saying, “there is a need for (regulatory) flexibility and security.”

About your suggestion at the President Moon Jae-in’s invitation meeting of the foreign-invested company.

“There was a lot of talk about the 52-hour workweek. Shorter working hours can lead to a policy which might result loss for both managers and workers. This is because workers have lower wages, and companies have to hire more workers. I wanted to talk about the need for a period of sufficient coordination before policy enforcement. It is necessary to balance the pros and cons caused by regulations. It is a way to protect Korea’s industrial competitiveness.”

The European Union has been working 48 hours a week since 1993.

“European companies welcome a reduction in working hours. I think the direction of the policy is right, but it should be implemented in conjunction with other policies such as job flexibility and flexible working hours. In Europe, part-time work is three to five hours a day, three to four days a week. As part-time became more common, working hours were naturally reduced. Flexible adaptation of the system and sufficient discussion periods allow companies to plan long-term plans ahead and to adapt to changing conditions.”

Is the level of Korean regulations ‘tough’?

“Labor-friendly policies and environmental regulations are being tightened around the world and not just in Korea. However, as mentioned earlier, it would be desirable to have enough time for discussion to allow stakeholders to share opinions before regulations get implemented. Each year we publish a white paper on regulatory reforms and receive feedback from the government, for the sake of discussion with the government.”

The government’s attitude towards the ECCK’s proposal?

“Last year, a total of 123 proposals were presented by committees of 14 industry sectors from ECCK, where we received responses in all areas in April, two weeks after meeting President Moon. Of course, we don’t expect all proposals to be accepted 100% overnight as if we swing a magic wand. What is more important than acceptance rate is the attitude towards each other. I want to maintain an optimistic and proactive conversation between the government and business.”

As we talked about regulation, we could not help but ask about the controversy of the mobility service ‘Tada’. On December 5, the National Assembly passed an amendment to the Passenger Vehicle Transportation Business Act, called the “Tada Ban”. Chairperson Psillakis, likewise responded with the same message: “(government and business must) look at common goals.”

I want to know what you think about the ‘Tada’ service controversy and the direction to resolve the conflict.

“We need to be aware of two aspects: the possibility of innovation and the social picture. To do this, both businessmen and politicians must find ways to keep up with consumer needs and trends. What is noteworthy in this debate is that demand for mobility consumers is changing. The opposition between the two sides is not the solution. Be open and aware of social needs, trends and problems and find solutions. Legal arguments don’t help solve problems.”

His basis to dealing with the government is collaboration rather than confrontation. This philosophy is reflected in his management activities. Mercedes-Benz Korea invited the head of Seoul’s Economic Policy Department to open the EV brand EQ exhibition hall on Garosu-gil, Seoul in October. In this session, he announced the Seoul Urban Plan “Vision Seoul 2039,” which was intended to transform Seoul into an eco-friendly city with electric vehicles and air purification technology. Seoul City and Mercedes-Benz Korea have opened up the possibility of collaboration in the long term.

This year, the Korean government has strongly focused on innovation. In your view, any change over the past four years?

“President Moon Jae-in and Prime Minister Lee Nak-yeon, as well as Choi Ki-young, Minister for Science, Technology and Innovation, and Park Young-sun, Minister for SMEs and Startups, are laying great emphasis on ‘innovation’. I think it is very positive to define social problems and to establish long-term solutions based on the fourth industrial technologies. For example, the problem of climate change is rising all over the world, and Korea has a problem of air pollution centered on fine dust. The Korean government is encouraging the development of hydrogen or electric vehicle technology and is willing to resolve the problem in the long term. We believe that innovation can happen when a company-friendly environment is created. Innovation follows when companies can breathe. If you put it inside a box (regulation), it won’t work.”

What is the role of European firms in Korea in a period of low economic growth?

“Korea’s economic growth rate is slowing but it is not a crisis. It is a natural procedure. Europe has had economic growth of less than 2% for 20~30 years. I think Korean companies and European companies can cooperate to innovate. Korea has excellent network technology such as 5G mobile communication, which is the foundation of innovation. On the other hand, Europe has strengths in automation and artificial intelligence. Combined, these features can generate significant revenues in the global market. I think it’s a good survival strategy especially when manufacturing industry is struggling from production costs.”

Most of the content included in this year’s ECCK proposal was that the Korean regulations did not meet with the international standards. For example, six out of ten proposals in the automotive industry committee were such cases. As there is a different standard in Korea, the situation is that the instrument clusters must be customized specifically to Korea or the exhaust gas or noise level test needs to be repeated.

Chairperson Psillakis emphasized that “Korean regulations will help both countries if they follow international standards.” “In this way, European companies do not have to pay extra for Korean exports in the production of global industrial products, such as automobiles,” he added. It is also an important issue for Korea, a country that is heavily dependent on exports. It is convenient for Korean companies to follow international standards in order to reduce their export costs.

The white paper also states that a regulatory adaptation period for foreign companies is necessary. According to the current law, the vehicle owner can request exchange/refund for the vehicle when the cumulative number of repair days is over 30 days. Chairperson Psillakis said, “the research and development (R&D) and production of foreign companies are done overseas, so it requires longer delivery time for the parts than Korean companies.”