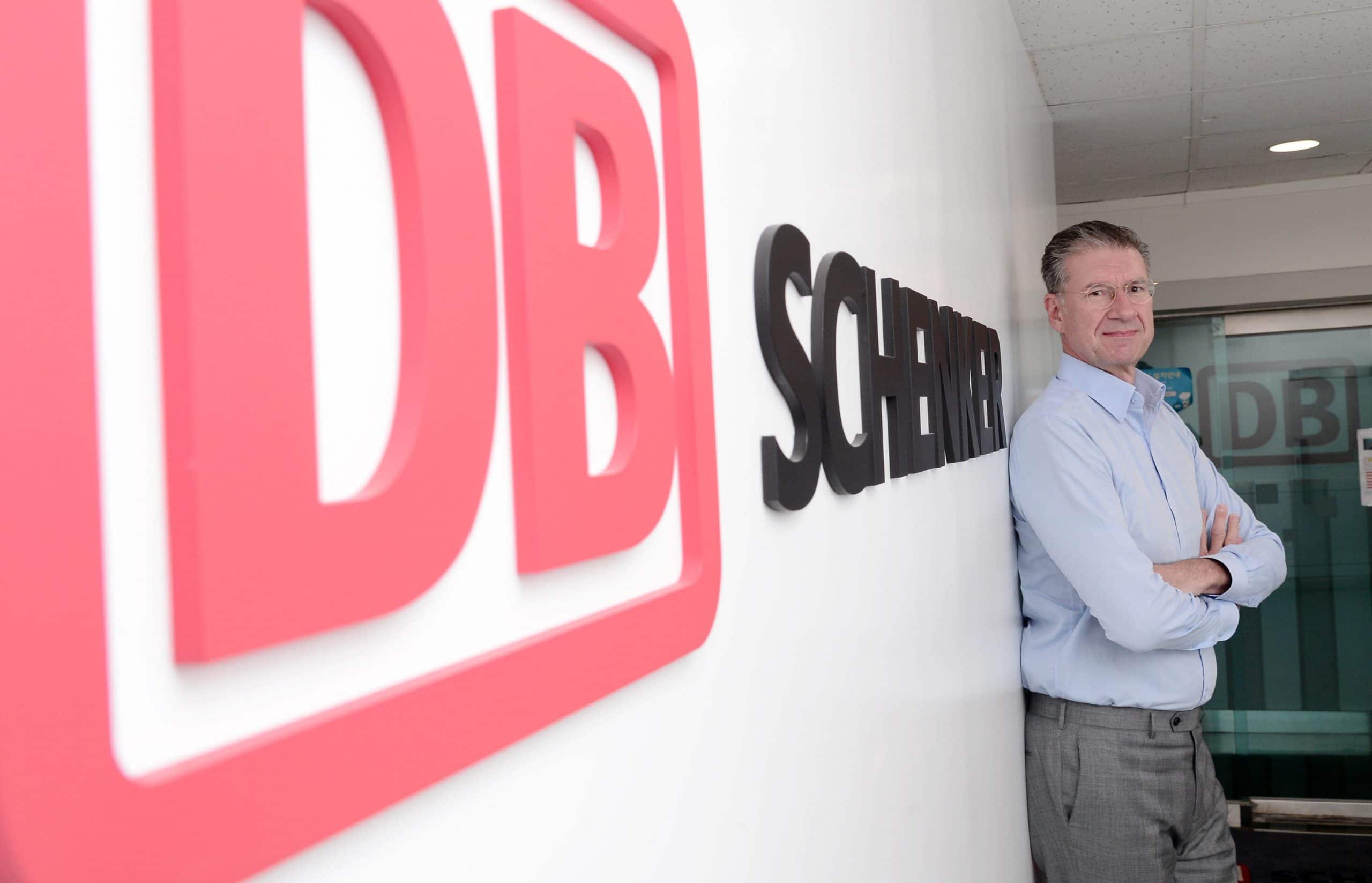 An interview with ECCK Chairperson Dirk Lukat was published in Herald Biz on October 29. In the interview, Chairperson Lukat shares the importance of international standards along with his personal experience in Korea.

ECCK Chairperson and Schenker Korea CEO Dirk Lukat is considered as one of the ‘Korea experts’ within the Korean business community. He has been working in the global logistics industry for nearly 30 years, he has confidence in the development of Korean economy and culture. On the other hand, he shares hard truth regarding government’s business regulations, which have been under severe ups and downs over the past few years.

Recently Chairperson Lukat sat with Herald Biz for an interview at the Schenker Korea’s office in Mapo and he stated, “It is necessary for the government to create a consistent and foreseeable business environment to attract and maintain long-term investments.”

ECCK is a non-profit organization established in 2012 and it promotes Korea and Europe’s trade, commercial, and industrial relations. It has around 370 member companies and represents the voices of about 50,000 European businesspeople.

▶“One-way regulations …The voice of stakeholders must be heard”

ECCK’s annual ‘White Paper’ has been placed as the package of recommendations to the Korean government.

Chairperson Lukat pointed out, “In Korea, there are still many cases where the regulation that can affect domestic and foreign companies changes swiftly without proper advice from stakeholders and parties,” adding, “There are many times when there is a lack of appropriate evaluation of the side effects of new policies.” One of the examples was a sharp increase in the minimum wage.

“Also, rapid policy changes – among other factors – could lead to a number of companies leaving Korea.”

In fact, international standardization is very important not only for foreign companies but also for Korean companies, he said. “If we only stick to domestic standards, the cost of foreign companies providing products and services to the Korean market will increase, and the prices Korean consumers will have to pay.”

As a logistics expert he is positive of the future growth potential of the Korean market.

Chairperson Lukat said, “China and India are considered one of the best countries in terms of national size, but unlike these countries, Korea has many strengths as a business because it specializes in high value-added products such as high-tech, IT, and pharmaceuticals.” Schenker is a global transportation and logistics service company belongs to the Deutsche Bahn (DB) group. It oversees overall logistics services such as contract logistics, exhibition logistics, air transport, sea transport, and land transport.

Although it is not well known to the general public, the company is so reliable in the industry that it was in charge of transporting bobsleighs and broadcasting equipment during the 2018 Pyeongchang Olympics.

He picked “people” as the most important factor in the logistics industry. “We also need professionals when transporting semi-conductor equipment, which is sensitive to temperature and impact, and we deploy professional drivers suitable for special trucks,” Chairperson Lukat said. “We have experts with international certificates are working as logistics solver.”

He also showed interest for possibility of using the North Korean market. Chairperson Lukat said, “In South Korea we are kind of locked. Today, we mainly use of course air or ocean freight, whereas we also use ferry services to China and then connect to rail. The cost of logistics fee is going up.”

He continued, “I’d hope that sometime in the future there are ways to have rail connections passing through North Korea and connecting South Korea to North Korea, China,  Southeast Asia and Europe by rail or truck connection.”

When asked what made him be interested in Korea, Chairperson Lukat answered “Chaebol” straight in Korean.

He said, “I grew up outside of Germany when I was young. My parents were working abroad and thus I got a chance to see other cultures and meet people from different background. I became interested in conglomerates from Korea such as Samsung and Hyundai that have influence far above boarders of Korea. While I study about this company, I became more interested in Korea.”

He also picked ‘networking’ as one of important aspects of Korean business. He said, “n Korea you have very strong networks starts at a very early age, after school, latest at university. For foreigners it can be difficult enter and to build up these networks, especially if you only stay for a short time in the country.” He added, “But on the other hand, if you try and if you are open to engage with people that then opens doors.”

Chairperson Lukat’s most important value when doing business is ‘empathy’. He said “I’ve always been interested in empathy between people and there’s a bit of a trend about sustainable empathy. I believe that it is very important to make the world a healthier and safer place for the next generations. In order for them to have same resources as we do and can live a normal life.”

Regarding COVID-19 situation, Chairperson Lukat commented “I must praise the government and the people of Korea how well they’ve handled the global pandemic. In order to go back to normal, it should be under the guidance of safety and being sensible about what we do with new freedom.”

When asked regarding future plans, he answered “I feel sense of great responsibility for both roles as ECCK Chairperson and Schenker Korea CEO.

Chairperson Lukat said, “in terms of Schenker the investment in a new facilities in the Incheon FEZ. Further we are working with a company developing drones. And we work together with well-known institutes to develop new technologies.”

Furthermore, “the white paper is very important for us. We see that the White Paper as basis for a stable of business environment and in that way we want to contribute to Korea. As chairperson of ECCK, I will communicate with Korean government in base of White Paper.”

Also, “the ECCK has implemented ‘Junior board’ (future development forum) in order to hear out the young European businesspeople. Chairperson Lukat said “Forum’s purpose is to provide young professionals a platform to get connected across industries and to learn more about cross-industry trends. It’s open to young professionals (25 to 40 years of age),” said Chairperson Lukat. Also he added, “European startups are already doing various activities in Korea, and they have not been able to reflect that voice. I think the knowledge and experience of these junior managers can become the motive for innovation.”

It’s the 7th in year in Korea for ECCK Chairperson Dirk Lukat.

He has joined Schenker Group in 1986 and has been posted overseas from 1990 including Japan, Vietnam, Singapore and other Asian countries almost for 30 years.

When asked to pick the best thing about Seoul compared to other cities, he answered “Green City” without hesitation. Chairman Lukat said, “There are not many cities in Asia that work in the city center during the week and return to nature right after weekends or work,” adding, “Koreans and foreigners talked about air pollution – especially when fine dust was a problem –  on nice days I think Seoul, surrounded by mountains and rivers, is a beautiful city.”

His hobby is biking in Seoul and Seoul vicinity. He said, “On the weekends, enjoy riding my bike. I have always been biking, but here I took up road biking. I enjoy the Han river and the mountains like Namsan in Seoul vicinity.”

Chairperson Lukat said, “In general exercise is part of my daily routine to relax and give my mind wider focus. I am always a curious person and like to learn and take up new topics. This year I tried surfing but it wasn’t easy.”

During the pandemic, he couldn’t travel, but on the positive side, it gave him the chance to explore Seoul and Korea.

Chairperson Lukat said, “(Since Pandemic) I’ve discovered interesting areas, nice places I have returned to and I am always amazed at the beauty of nature in Korea. I enjoy being in nature and to once in a while escape from the hectic Seoul life to see the beautiful countryside of Korea. Also, the best asset of Korea is the devoted and passionate people”

He continued, “My daughter listens to K-pop and I have experienced listening to it next to her. I’d like to mention is the potential of Korea in terms of people and culture. We have all the K-activities, including K-pop, K-food, K-cosmetics which have grown a global fan base.”

His love for Korean food is special. In normal days he enjoys samgyetang, sullungtang and ganjang gejang, and recently I am interested in snow crab which is in season.”

Our last question that whether he’s satisfied living in Korea, he has answered “very satisfied.” He said, “in the past two years, due to the restrictions from COVID-19 pandemic I got to take some time to understand the Korean culture better. Also, it’s meaningful to spend more time with my family in a beautiful city like Seoul.” 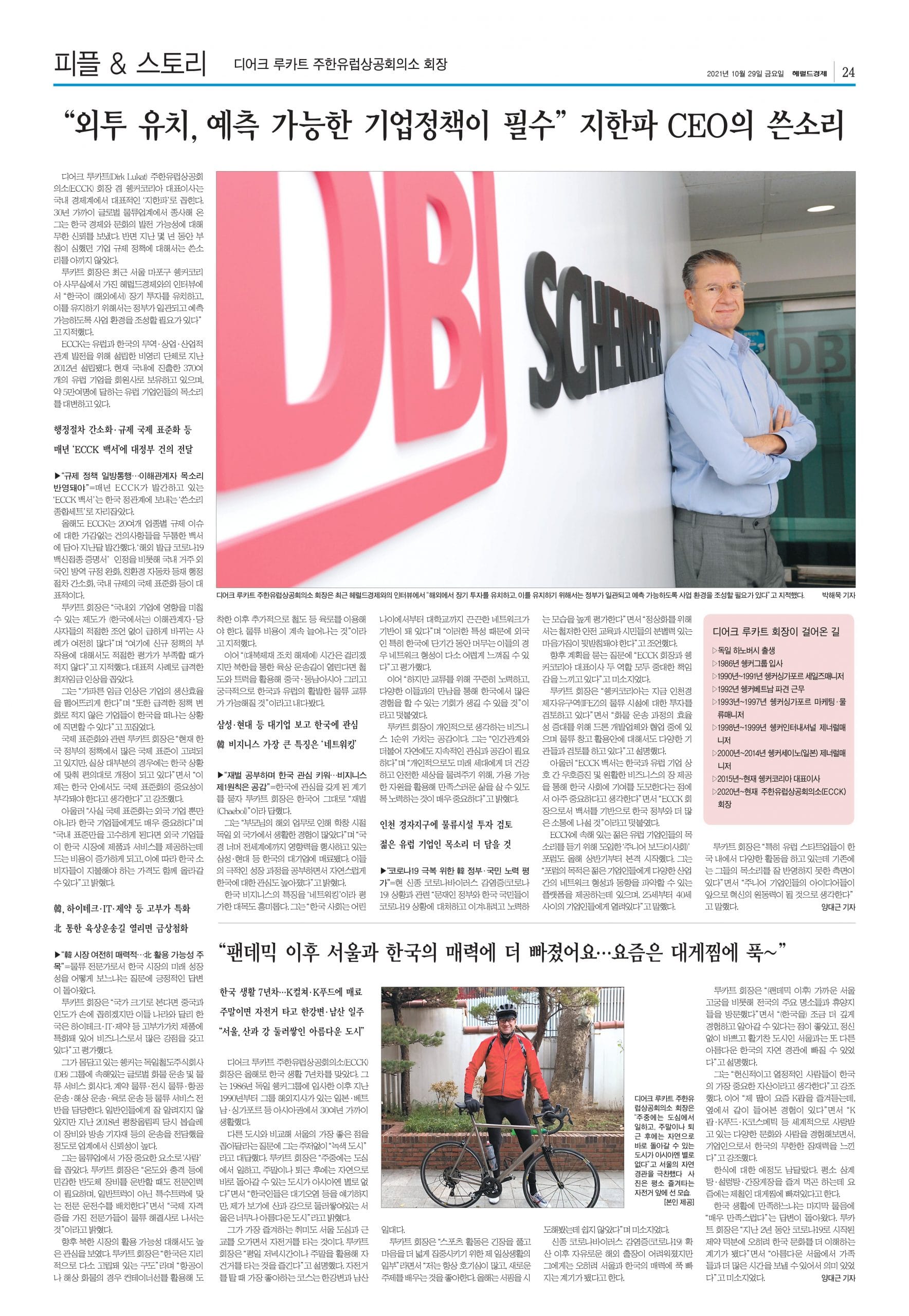