An interview with ECCK Chairperson Dimitris Psillakis was published in The Korea Times on May 13. In the interview, Chairperson Psillakis shares his view on how Korea is responding to the COVID-19 pandemic and ways to further develop Europe-Korea relations. 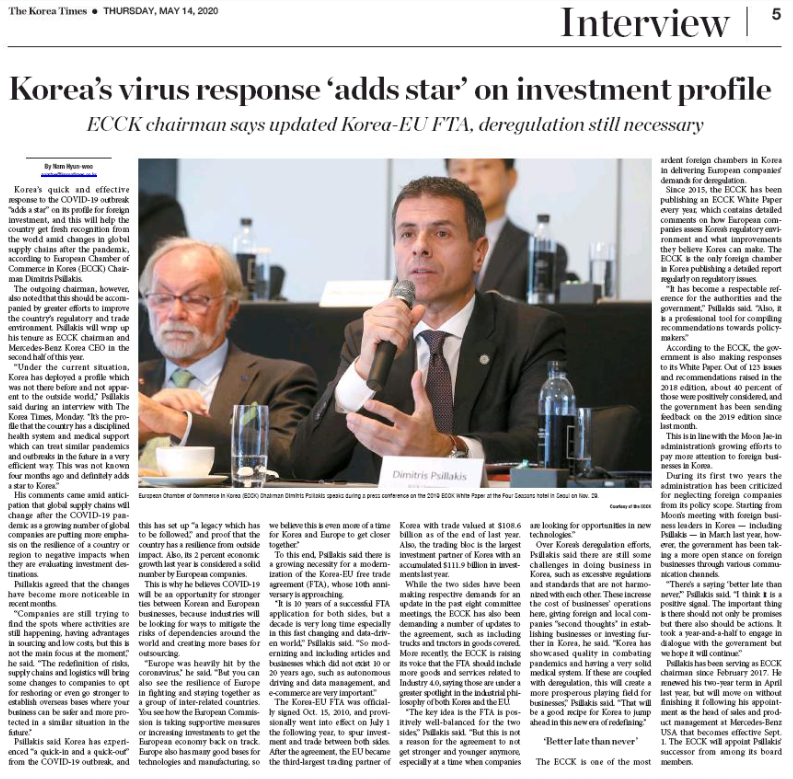 Korea’s quick and effective response to the COVID-19 outbreak “adds a star” on its profile for foreign investment, and this will help the country get fresh recognition from the world amid changes in global supply chains after the pandemic, according to European Chamber of Commerce in Korea (ECCK) Chairman Dimitris Psillakis.

The outgoing chairman, however, also noted that this should be accompanied by greater efforts to improve the country’s regulatory and trade environment. Psillakis will wrap up his tenure as ECCK chairman and Mercedes-Benz Korea CEO in the second half of this year.

“Under the current situation, Korea has deployed a profile which was not there before and not apparent to the outside world,” Psillakis said during an interview with The Korea Times, Monday. “It’s the profile that the country has a disciplined health system and medical support which can treat similar pandemics and outbreaks in the future in a very efficient way. This was not known four months ago and definitely adds a star to Korea.”

His comments came amid anticipation that global supply chains will change after the COVID-19 pandemic as a growing number of global companies are putting more emphasis on the resilience of a country or region to negative impacts when they are evaluating investment destinations.

Psillakis agreed that the changes have become more noticeable in recent months.

“Companies are still trying to find the spots where activities are still happening, having advantages in sourcing and low costs, but this is not the main focus at the moment,” he said.

“The redefinition of risks, supply chains and logistics will bring some changes to companies to opt for reshoring or even go stronger to establish overseas bases where your business can be safer and more protected in a similar situation in the future.”

Psillakis said Korea has experienced “a quick-in and a quick-out” from the COVID-19 outbreak, and this has set up “a legacy which has to be followed,” and proof that the country has a resilience from outside impact. Also, its 2 percent economic growth last year is considered a solid number by European companies.

This is why he believes COVID-19 will be an opportunity for stronger ties between Korean and European businesses, because industries will be looking for ways to mitigate the risks of dependencies around the world and creating more bases for outsourcing.

“Europe was heavily hit by the coronavirus,” he said. “But you can also see the resilience of Europe in fighting and staying together as a group of inter-related countries. You see how the European Commission is taking supportive measures or increasing investments to get the European economy back on track. Europe also has many good bases for technologies and manufacturing, so we believe this is even more of a time for Korea and Europe to get closer together.”

To this end, Psillakis said there is a growing necessity for a modernization of the Korea-EU free trade agreement (FTA), whose 10th anniversary is approaching.

“It is 10 years of a successful FTA application for both sides, but a decade is very long time especially in this fast changing and data-driven world,” Psillakis said. “So modernizing and including articles and businesses which did not exist 10 or 20 years ago, such as autonomous driving and data management, and e-commerce are very important.”

The Korea-EU FTA was officially signed Oct. 15, 2010, and provisionally went into effect on July 1 the following year, to spur investment and trade between both sides. After the agreement, the EU became the third-largest trading partner of Korea with trade valued at $108.6 billion as of the end of last year. Also, the trading bloc is the largest investment partner of Korea with an accumulated $111.9 billion in investments last year.

While the two sides have been making respective demands for an update in the past eight committee meetings, the ECCK has also been demanding a number of updates to the agreement, such as including trucks and tractors in goods covered.

More recently, the ECCK is raising its voice that the FTA should include more goods and services related to Industry 4.0, saying those are under a greater spotlight in the industrial philosophy of both Korea and the EU.

“The key idea is the FTA is positively well-balanced for the two sides,” Psillakis said. “But this is not a reason for the agreement to not get stronger and younger anymore, especially at a time when companies are looking for opportunities in new technologies.”

Over Korea’s deregulation efforts, Psillakis said there are still some challenges in doing business in Korea, such as excessive regulations and standards that are not harmonized with each other. These increase the cost of businesses’ operations here, giving foreign and local companies “second thoughts” in establishing businesses or investing further in Korea, he said.

“Korea has showcased quality in combating pandemics and having a very solid medical system. If these are coupled with deregulation, this will create a more prosperous playing field for businesses,” Psillakis said. “That will be a good recipe for Korea to jump ahead in this new era of redefining.”

The ECCK is one of the most ardent foreign chambers in Korea in delivering European companies’ demands for deregulation.

Since 2015, the ECCK has been publishing an ECCK White Paper every year, which contains detailed comments on how European companies assess Korea’s regulatory environment and what improvements they believe Korea can make. The ECCK is the only foreign chamber in Korea publishing a detailed report regularly on regulatory issues.

“It has become a respectable reference for the authorities and the government,” Psillakis said. “Also, it is a professional tool for compiling recommendations towards policymakers.”

According to the ECCK, the government is also making responses to its White Paper. Out of 123 issues and recommendations raised in the 2018 edition, about 40 percent of those were positively considered, and the government has been sending feedback on the 2019 edition since last month.

This is in line with the Moon Jae-in administration’s growing efforts to pay more attention to foreign businesses in Korea.

During its first two years the administration has been criticized for neglecting foreign companies from its policy scope. Starting from Moon’s meeting with foreign business leaders in Korea ― including Psillakis ― in March last year, however, the government has been taking a more open stance on foreign businesses through various communication channels.

“There’s a saying ‘better late than never,'” Psillakis said. “I think it is a positive signal. The important thing is there should not only be promises but there also should be actions. It took a year-and-a-half to engage in dialogue with the government but we hope it will continue.”

Psillakis has been serving as ECCK chairman since February 2017. He renewed his two-year term in April last year, but will move on without finishing it following his appointment as the head of sales and product management at Mercedes-Benz USA that becomes effective Sept. 1. The ECCK will appoint Psillakis’ successor from among its board members.

Link to the article: [The Korea Times] Korea’s virus response ‘adds star’ on its investment profile