An interview with ECCK President Christoph Heider was published in KOTRA Express on April 29. In this special interview, President Heider shares his views on doing business in Korea and how the country is responding to the COVID-19 pandemic. 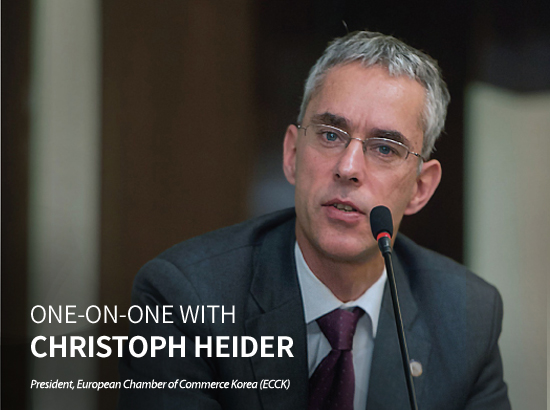 In 2013, Heider became the President of the European Chamber of Commerce in Korea (ECCK), and in 2016, he received Honorary Citizenship of Seoul. His other honorary assignments include being a board member of Heider-Kober Foundation in Munich, Germany as well as being a member of the European Union Domestic Advisory Group and the Korea-EU Civil Society Forum. Heider currently lives in Korea with his wife, daughter and son.

Please tell us a little about yourself.

I left my home country Germany in 1997 when I was moving to Japan to join my former employer, Bayer.

20 years ago in the year 2000, I had the opportunity to work from time to time in Korea when Bayer implemented so called “country groups,” with one of them being the Japan-Korea group.

Then in 2010, I had the opportunity to be transferred to Korea, to which I agreed immediately to with no hesitation. It was good to be back in such a beautiful country and get reconnected to friends I met in my first encounters at the company.

What are some of the advantages of doing business in Korea?

Korea has a lot to offer. It is a huge source of innovation and change. Despite the fact that Korea has so much drive to change—which is the reason that Korea is leading in so many different industry fields—it has not forgotten its roots and traditions. All of the Korean people I’ve met are hard-working with a high determination to succeed. The IT infrastructure is just outstanding, and I would wish that in my home country we would have a similar one.

How interested are companies from Europe in investing in Korea and what sectors are they most interested in?

Korea remains in high focus for European companies in many aspects; from sourcing of outstanding products via direct export to the establishment of subsidiaries to serve Korean B2B and B2C consumers. In the first quarter of 2020 alone, about 20 companies from Europe established their affiliates offering services and products among others in consulting, machinery, textiles or tourism.

It is good to see that the business focus is not only on specific industry segments but that it covers various ones. Furthermore, and equally important, commitment in Korea can be clearly seen in the re-investment of capital earned in Korea.

What kinds of support do investors from Europe want from Korea?

Actually, Korea has an excellent system for taking care of companies. Not only does the country offer various incentives but government agencies such as KOTRA and the Foreign Investment Ombudsman stand second to none in the world when it comes to supporting foreign investors.

Naturally, what companies need is an environment where business can prosper. This is easily said but difficult to reach. As such, the ECCK is working in close collaboration with the Office of the Foreign Investment Ombudsman, namely, to ensure that there is a consistent legal framework governing business as well as to ensure that amendments are carried out in a transparent and predictable manner.

What advice would you give investors and companies from your country seeking to do business in Korea?

First and foremost: Seize the day, go ahead and invest, start your business operation. The economic potential in Korea is higher than in Europe, the infrastructure is excellent, and so is Korea’s highly qualified workforce. It would be a mistake not to be in Korea.

Secondly: use the expertise and networks already established here on the ground. This includes not only the ECCK or the Foreign Investment Ombudsman at KOTRA, but also the wide range of other business chambers and associations, outstanding service providers and knowledgeable long-term residents running their businesses. Korea is an ideal country for networking and as a new arrival, you have to form networks to ensure business success but also for your own well-being.

What are your views on Korea’s response to the COVID-19 pandemic?

The Korean government did a great job in containing the COVID-19 virus. This becomes very obvious when you just take a look at the pure numbers of infected people in Korea and in Europe.

As the first step, it was important and wise to focus primarily on health, and as the second step, short-term measures were implemented to ensure the survival of businesses and to safeguard employment. For the next step—which is actually evenly important—I would wish to see the Korean administration come up with some mid- to long-term measures such as the amendment of rules and regulations, moving closer to international standards to facilitate economic recovery.

What are some lessons that others can take away from how Korea is handling the situation?

Here at the ECCK, all of our staff is strictly abiding by the Korean government’s measures on intensive social distancing to halt the spread of the virus. Our Chamber has cancelled or postponed all our face-to-face events and meetings. Instead, we have replaced our seminars and information sessions with Webinar series featuring remarkable speakers to keep our members informed. For me, personally, at home, it’s not always easy as I have two kids aged 8 and 4 who need to be “entertained.” Anyhow, I think the key factor for the successful slowing in the spread of the virus in Korea is not only the excellent leadership by the health authorities but also the active participation by Korean citizens. Thus, my recommendation to other countries would simply be: Accept leadership and trust in them to well handle the pandemic.

How do you think the current situation is affecting business activities?

The impact on business will become more and more visible and it will become a tough one, which is a very high concern for many business people including myself. In fact, there are concerns that the economic crisis due to COVID-19 will be much heavier than the financial crisis in 2008. Up to now, the focus was on short-term crisis management but it is time to implement other mid- and long-term reforms.

We are now unfortunately entering a vicious cycle; reduced business activities, problems in product supply and logistics and flow of goods via customs, less income generated by individuals and corporations, decrease in profitability, cost saving measures including delay of investment and reduction of head count. A stimulus package—as the name indicates—can only provide a one-time stimulus. Thereafter, the economic system needs to improve on its own; a recovery will be faster and more powerful when adjustments in the legal framework are wisely carried out to facilitate business.

What are your hopes for future economic relations between Korea and European countries?

I am very optimistic about the economic ties between Korea and Europe. The relationships between Korea, the European Union and its member states, the European Free Trade Association, as well as the United Kingdom have been excellent and will further prosper—this is also because all of them share the common understanding of free competition and free trade.

I hope that the economic relations will become even stronger when the agreements to modernize the KOR-EU FTA as well as the KOR-EFTA-FTA and to make them even better than before are reached.

Link to the article: KOTRA Express One-on-One with Christoph Heider