[August 14, 2019]. L’Oréal Korea announced that it appointed Christian MARCOS HARNAY from Spain as the new president as of August 12.

Christian MARCOS HARNAY is an expert in the cosmetics industry, who has experienced various positions in marketing, retail, and general management at L’Oréal Group for the past 15 years. Mr. MARCOS HARNAY, who has driven the business growth of the Group in various business divisions, will lead L’Oréal Korea’s business to reach new heights based on his experience and know-how.

Mr. MARCOS HARNAY joined L’Oréal in 2004 in Spain as Lancôme Marketing Manager, after several years of previous experience in the FMCG industries. He was quickly promoted to the Marketing Manager of L’Oréal’s fragrance brands and Helena Rubinstein, and then to the Commercial Director of the Luxury Division. He was later appointed the General Manager of Biotherm, Yves Saint Laurent and Kiehl’s in Spain. In 2014, he moved to France and worked as the Europe Zone General Manager for Lancôme. In 2017, he was promoted to the General Manager of the Latin America Zone for L’Oréal Luxury Division. 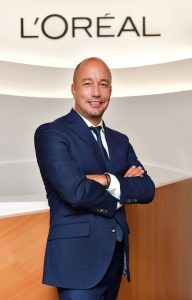