A special interview with Sven-Erik Batenburg, director of legal and international affairs and of the intellectual property rights committee at the ECCK, published in The Korea Herald on March 18. To read the article, please click on the following link: [IP in Korea] Korea needs to recognize damage counterfeits bring to economy: ECCK official

Even in developed economies that uphold high standards on intellectual property — including South Korea — the severity of damage caused by the production and distribution of counterfeits is not to be underestimated, according to a senior official of a leading European business advocacy organization here.

“Despite recent fluctuations in global ranking, South Korea offers a fairly good legal framework for intellectual property rights,” Sven-Erik Batenburg, director of legal and international affairs at the European Chamber of Commerce in Korea, told The Korea Herald in an interview.

“But when it comes to actual enforcement of these rights, especially in the area of counterfeits, the country still needs to move further ahead, just like most other countries around the globe.”

Batenburg, who also heads the intellectual property rights committee at the ECCK, said that in order for a country to make progress in the field of IP, it is crucial to first recognize the extent of the counterfeit market and the direct blow such delivers on the economic order.

According to a global competitiveness report on IP protection by the World Economic Forum, Korea ranked 54th out of 137 countries for the period 2017-2018, down five notches from a year earlier. China’s ranking soared from 62nd to 49th during the same period, while the United States and Japan stood at 14th and 18th, respectively.

Seoul’s ranking marked a contrast to its lead in the number of patent applications.

The World Intellectual Property Office’s annual report for 2017 showed that Asia’s fourth-largest economy was fourth in the total number of patent applications in 2016 and first in terms of applications per gross domestic product.

“What Korea tends to lack is a comprehensive study on how counterfeits and other forms of IP violation directly harm its economy,” the ECCK official said, citing the European Union Intellectual Property Office’s regular report on the economic effect of IP.

Counterfeit goods are estimated to account for nearly $500 billion per year or around 2.5 percent of global trade, according to a report by the Organization for Economic Cooperation and Development. In the EU, about one-third of jobs and some 40 percent of the total GDP is related to IP, according to the union’s IP office.

Also, because of the exceptional level of return on investment — reaching as high as 50,000 percent — the business tends to be operated by criminal syndicates that are likely to exploit the resulting profits for illegal activities, the ECCK official added.

“(An unconstrained counterfeit market) would consequently deliver a double blow upon the government as it not only cuts down on the key growth indexes but also goes hand in hand with tax evasion,” he said.

In recognition of such challenges, the ECCK has been holding an annual seminar for all IP-related enforcement agencies here, allowing Seoul’s officials and ECCK member companies to share updates on market regulations.

Last year, it held a survey at the Busan Global Gathering, extending its efforts to measure the public’s perception of counterfeit problems and to enhance awareness of IP rights.

The organization also played a key role in inducing the Korea Customs Office two years ago to produce a regular report on counterfeit seizures here, taking example from the EU model.

“What one should note is that counterfeits are not just about fake Louis Vuitton bags or pirated Nike running shoes, but also exist in more critical areas such as pharmaceuticals,” Batenburg said.

Over 10 percent of the drug trade in Africa is estimated to involve counterfeits, but more developed parts of the world are not exempt from such potential threats.

“Even in South Korea, (the national railway operator) KORAIL turned out to have purchased counterfeit parts, a transaction which could have led to serious damages,” he said. 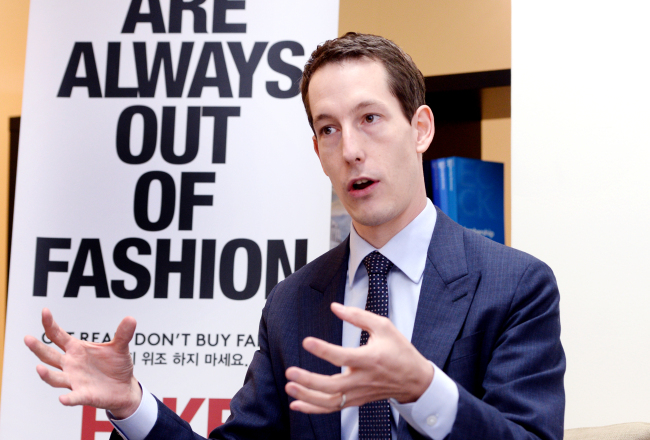 Sven-Erik Batenburg, director of legal and international affairs and of the intellectual property rights committee at the European Chamber of Commerce in Korea. (Park Hyun-kyoo/The Korea Herald)