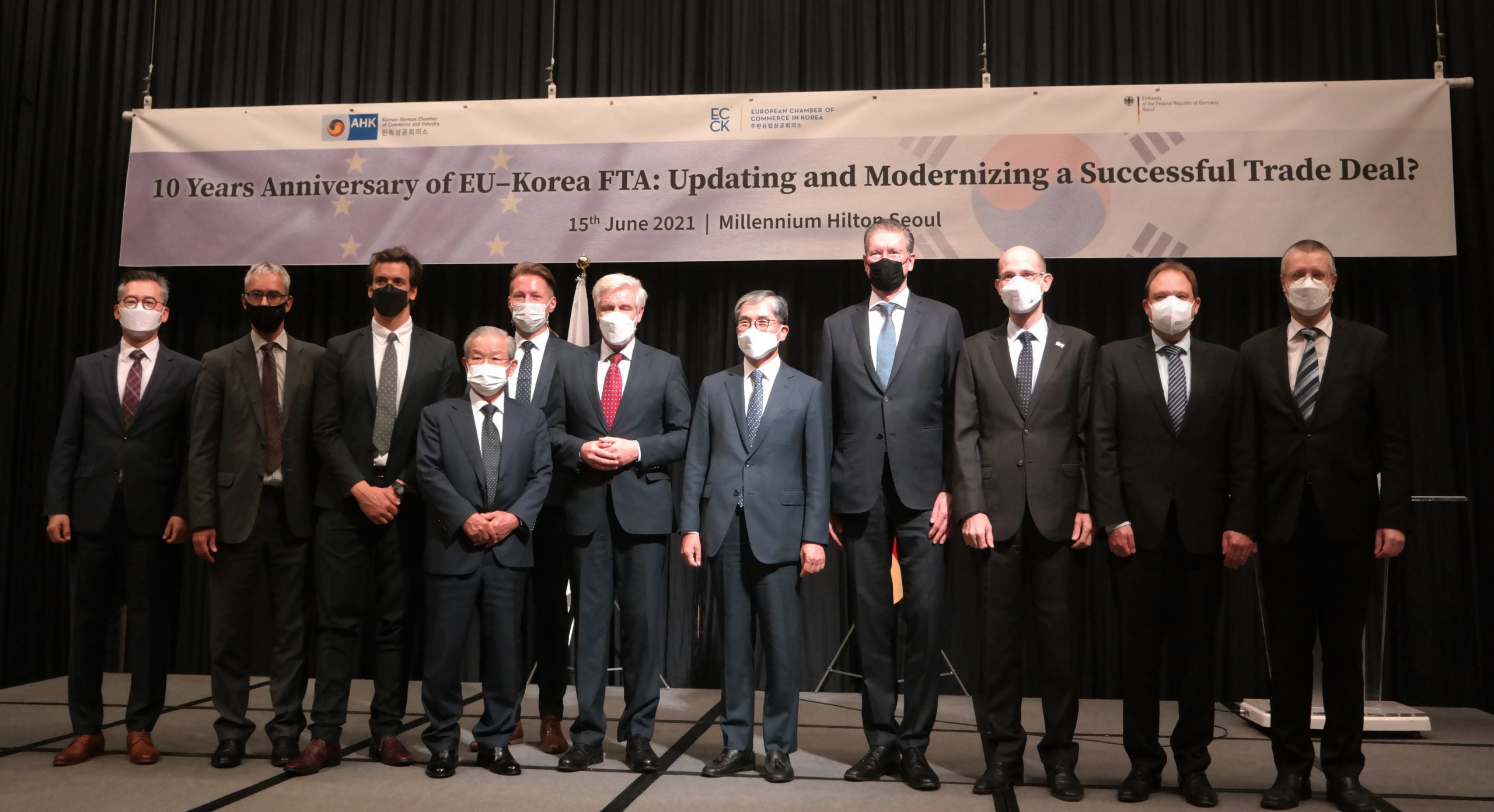 On June 15, ECCK co-hosted a hybrid event to celebrate the 10th anniversary of the EU-Korea FTA with the Korean-German Chamber of Commerce and Industry (KGCCI) and the German Embassy in Korea.

The event was held to commemorate the FTA’s anniversary, seeking to update and modernize the trade deal to keep up with the rapid development of industry and economy. During the event, the speakers and panelists looked back at the last 10 years and the achievements the FTA has brought to EU and Korea.

During his keynote speech, ECCK Chairperson and Schenker Korea CEO Dirk Lukat said, “10 years ago the hopes for the FTA were high and I can clearly state that those hopes have not been disappointed. The FTA brought custom duties down and led to a certain standardization for technical products and the related certification procedures. Thus, what we observe and can see nowadays here in Korea – as a normal consumer – is a broader product variety visible, for examples in wine and beer in supermarkets and also with cars driving on the Korean roads. The same is true for Korean televisions or Korean cars in Europe.”

“The world has changed in the last 10 years and the way we live and do business has changed. A static FTA, will over time lose its effectiveness, whereas economic partners and trade among trading partners governed by more progressive FTA will prosper. Thus, it is my belief that a modernized EU-KOR FTA is needed,” he added.

German Ambassador to Korea H.E. Michael Reiffenstuel said in his greeting, “The EU-KOR FTA stands out as a clear symbol against protectionism. It underlines both the EU and Korea’s strong commitment to a rules-based international trade order. Therefore, the 10th anniversary is a reason to celebrate. But it is also an excellent opportunity to reflect on our trade relations with a future oriented look: Over the past years, new trade-related areas have evolved and will continue to grow as we are steadily overcoming the Covid-pandemic. Areas such as digitalization, digital trade and e-commerce prosper. Many companies in Europe and Korea have voiced their strong support for updating the FTA in relevant fields. We support companies in this endeavor. We are convinced that a modernized FTA would be in the high interest of all parties.”

Dr. Martin Henkelmann, President & CEO of KGCCI said, “The EU-Korea FTA has been a bench mark for other FTAs and a strong signal of two economic global key players for enhancing the unrestricted exchange of goods. 10 years later, it is the right time to take stock: the global economic environment has changed and the needs of the businesses in Korea and the EU have evolved. A modernized EU-Korea FTA would – once again – stand out as a forceful signal for rule based global trade which is the foundation for the success of Korean and European companies.”

For more information, please find the links to press clippings: