A leading driver and strong advocate for European Businesses in Korea
An interview with ECCK Chairperson Dimitris Psillakis was published in Segye Ilbo on February 19. To read the full article, please click on the following link: “국내 유럽기업도 한국사회 일원 … 투자·고용 증대 기여” [세계초대석] Below is the English translation of the article. 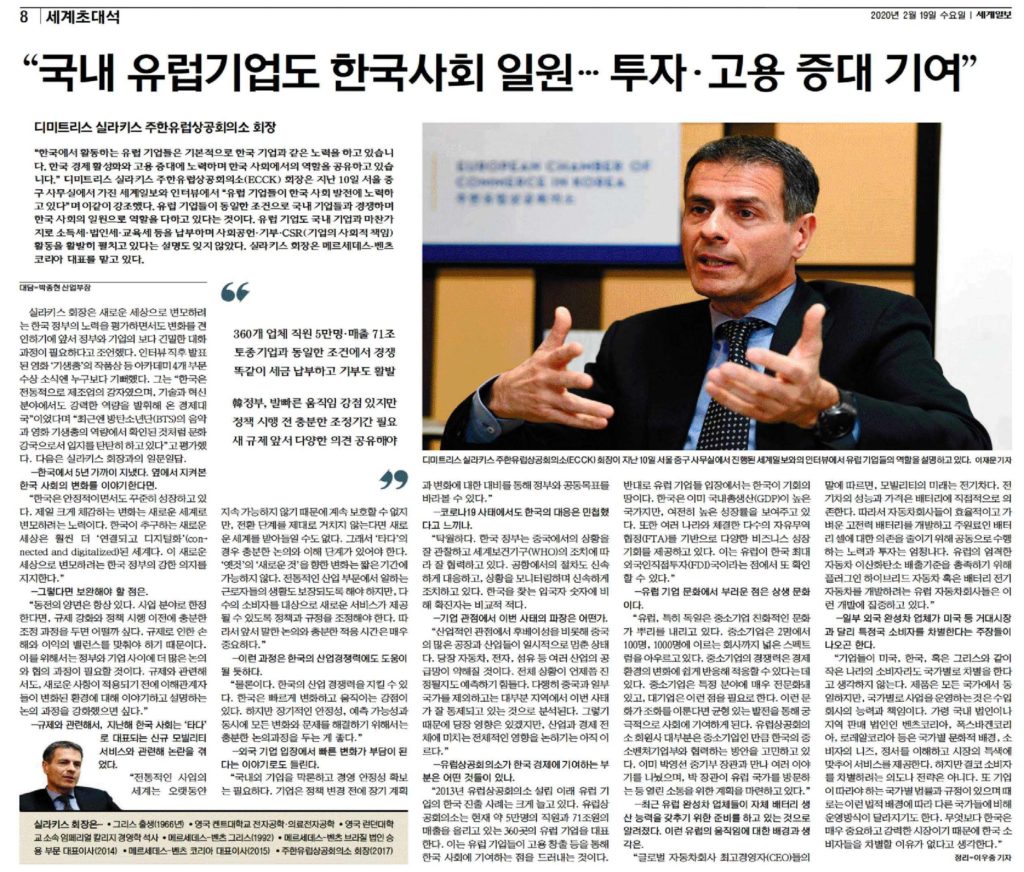 “European companies operating in Korea are putting in the same effort as Korean companies. We strive to revitalize the Korean economy and increase employment and share our role in the Korean society.” ECCK Chairperson Dimitris Psillakis said in an interview with Segye Ilbo at ECCK office in Jung-gu, Seoul on February 10. European firms are competing on equal terms with local firms and are playing its part as members of the Korean society. Like other local companies, European businesses also pay income tax, corporate tax, education tax, etc., and are actively engaged in social contribution, donation, and CSR activities. Psillakis is the CEO of Mercedes-Benz Korea. 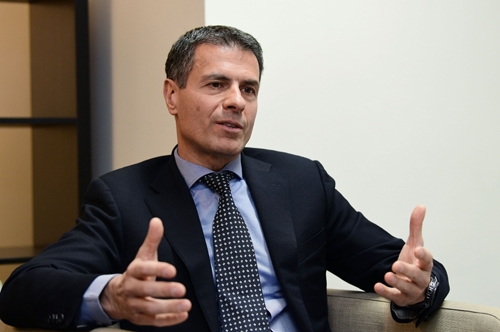 While evaluating the Korean government’s efforts to transform itself into a new world, Psillakis noted that closer consultation between the government and business is needed when it comes to changes. He was also pleased with the news of the film ‘Parasite’ winning four global academy awards. “Korea has long been a strong industrial manufacturer and an economic powerhouse that has also demonstrated strong capabilities in technology and innovation,” he said. “Recently, Korea has also solidified its position as a cultural powerhouse, as evidenced by BTS in music scene and film ‘Parasite’ in the movie industry.” Following is the Q&A interview with Chairperson Psillakis.

You have spent almost five years in Korea. If you can share the changes in Korean society that you’ve observed.
“Korea is growing stably and steadily. The biggest change is the effort to change into a new world. The new world that Korea is pursuing is a much more “connected and digitalized”. We support the Korean government’s strong will and effort to transform into this new world.”
What parts need to be complemented?
“There are always two sides of a coin. For business community, sufficient reconciliation before tightening of regulations and enforcing policies is good. It is necessary to balance pros and cons of regulations. This will require more discussion and consultation between government and business. With regard to regulation, we hope that the discussion process will be strengthened where stakeholders discuss and share opinions on the changed environment before the new one takes effect.”
In regards to regulations, last year Korean society had a controversy over new mobility services ‘Tada’.
“The traditional world of business won’t be sustainable for a long time, so we cannot continue to protect it, but we cannot accept a new world unless it is properly transitioned. So, in case of ‘Tada’, there should be sufficient discussion and understanding process. The shift from the old to the new is not possible in the short term. Workers working in traditional industrial sectors should also be guaranteed of their social security, but policies and regulations need to be adjusted to provide new services to a large number of consumers. Therefore, as mentioned before, consultation and sufficient adaptation time is very important.” 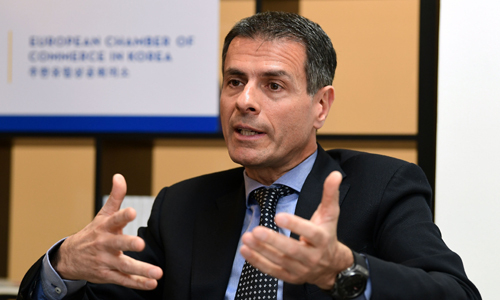 This process is likely to help Korea’s industrial competitiveness.
“Of course. It will protect Korea’s industrial competitiveness. Korea’s strength lies in fast changing and moving enviroment. However, it’s good to have a sufficient discussion process to address all changes and problems with long-term stability and predictability.”
It sounds like rapid changes become a burden to foreign companies.
“It is necessary to secure business stability, regardless whether it is a local or a foreign company. Business and government should look at common goals by preparing for change and long-term planning before policy changes.”
Do you think Korea’s measures were quick to act against Corona 19?
“Excellent. The Korean government observes the situation in China and cooperates well under the action of the World Health Organization (WHO). Procedures at the airport are quick to respond, monitor the situation and take action quickly. The number of confirmed cases is relatively small compared to the number of visitors to Korea. 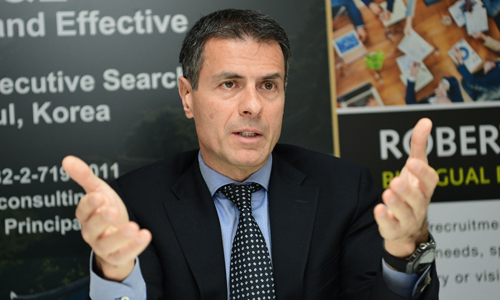 What is the impact of this incident from the business perspective?
“From business perspective, many factories and businesses in China, especially in Hubei, are temporarily suspended. For the time being, the supply chain for many industries, including automotive, electronics and textiles, will weaken. It’s hard to predict when the whole situation will calm down. Fortunately, the situation is well controlled in most regions outside China. That may have an immediate impact, but it’s too early to discuss the overall impact on industry and the economy as a whole.”
What are some ways the ECCK contributes to the Korean economy?
Since the establishment of the ECCK in 2013, the number of European companies entering Korea is increasing. ECCK currently represents 360 European companies with approximately 50,000 employees and 71 trillion won in turnover. This shows that European companies contribute to the Korean society through job creation. In contrast, for European companies, Korea is a land of opportunity. Korea is already a country with a high GDP, but still maintains a high growth rate. It also provides a variety of business growth opportunities based on its vast number of free trade agreements with many countries. This is also reflected from the number that Europe being the biggest foreign direct investor for Korea.
We admire Europe’s ‘win-win’ corporate culture.
“In Europe, especially in Germany, has SME-friendly culture. SMEs cover a broad spectrum, ranging from 2 to 100 or 1000 people companies. The competitiveness of SMEs is that they can easily adapt to changes in the economic environment. SMEs are very specialized in specific fields and large corporates need this. If this culture is harmonious, it will eventually contribute to society through balanced development. As most of the members of the Chamber are small and medium-sized companies, we are considering ways to cooperate with the Ministry of SMEs and Stratups. We have already met with Minister Park Young-sun to share opinions, and Minister is very open to communication and has plans to visit European countries.” 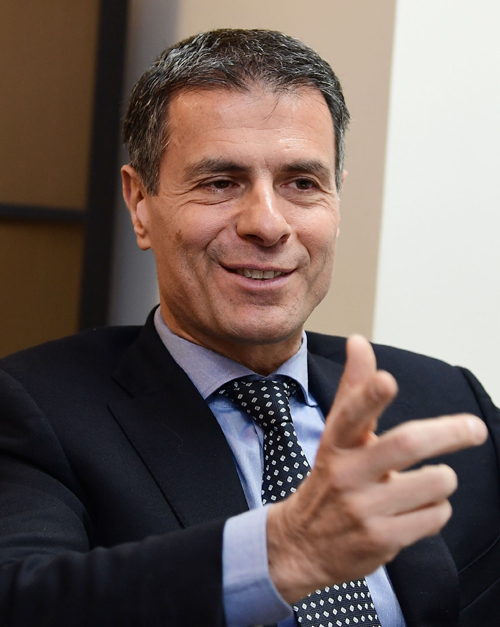 European carmakers are reportedly preparing to have their own battery production capacity. The background and your thought on this European movement.
“As per the statements of CEOs of global automotive companies, ‘the future of mobility is electric.’ The performance and price of an electric car depends directly on the battery. As a result, the joint efforts and investments by automakers to develop efficient and lightweight, high-power batteries and reduce their dependence on primary material, battery cells, are tremendous. European automakers are looking to develop plug-in hybrid vehicles or battery electric vehicles to fulfill stringent European fleet CO2 standards.”
There are claims that some foreign automakers discriminate against consumers in certain countries unlike big markets such as the US.
“We don’t think that companies discriminate against consumers based on countries, whether it is the US, Korea or a small country like Greece. The products are the same in all countries, but it is the importer’s ability and responsibility to run the business in each country. For example, local corporations or regional sales corporations such as Mercedes-Benz Korea, Volkswagen Korea, or L’Oreal Korea provide services in line with the local market characteristics by understanding the cultural background, consumer demands and sentiment of each country. But it is never an intention or a strategy to discriminate against consumers. In addition, there are country-specific laws and regulations that companies must follow, and these legal backgrounds sometimes change their operations compared to other countries. Above all, I think there is no reason to discriminate against Korean consumers because Korea is a very important and powerful market.”