Despite their geographical distance, Korea and France have enjoyed one of the strongest partnerships across the globe. Since establishing diplomatic ties in 1886, the two countries have maintained solid relations in a wide range of sectors. And to celebrate the 130th anniversary of Korea-France ties, the two governments launched the “Years 2015-2016 of Korea-France Bilateral Exchanges” to spur bilateral exchange. But it’s not only the private sector that is bolstering this long-spanning partnership—companies like Safran are as much about defining the future of Korea-France ties as its past.

Safran, a leading international high-technology group, has leadership positions in its three core businesses of aerospace, defense and security. Operating worldwide, this French company has 70,000 employees and generated sales of EUR 17.4 billion (USD 18.2 billion) in 2015. Working alone or in partnership, Safran holds world or European leadership positions in its core markets. In an interview with Alexis de Pelleport, Chief Executive Officer of Safran Korea, we find out more in detail about how the company is leading the pack in the world’s aeronautics and defense industries.

What kind of operations does Safran run?

For aerospace, Safran covers the entire life cycle of engines powering fixed and rotary-wing civil and military aircrafts: design, production, testing, sales and support. It also provides systems and equipment for civil and military fixed and rotary-wing aircrafts. Our products are used on most current and upcoming regional and business aircrafts, single-aisle and wide-body mainline jets. We draw on our broad-based technological expertise to offer complete packages to aircraft manufacturers and operators, including integrated propulsion systems (engine and nacelle), complete aircraft electrical systems and landing systems.

For the defense field, we offer a complete range of systems and equipment for both civil and military applications in the key areas of optronics, avionics, navigation, electronics and safety-critical software. Our solutions facilitate the work of homeland security and police forces, customs, and maritime and mountain rescue teams. They enhance the efficiency of armed forces – air, land and sea – in many countries around the world.

In the security business, Safran spans a number of applications and technologies, including detection of explosives and illicit substances, multibiometric identification, secure ID documents and online transactions, and much more.

Our solutions help ensure the safety and security of people, businesses and countries. They guarantee the security of transport, high-risk infrastructures and transactions, and enhance the protection of people and goods.

Safran established Safran Korea in Seoul a few years ago. What made the company expand its business here?

Safran has been in business with South Korea for more than 30 years through some of our subsidiaries.

This relationship, built on mutual trust, could not materialize without a local presence of Safran, that’s why the Group has decided to open a company, which I am honored to be the first CEO.

The Korean people never cease to amaze us with their production capacity and their ability to progress both technologically and in terms of manufacturing process. This industrial capacity makes Korea a high potential partner for a large industrial group of high technology like Safran. Korea’s aerospace and defense industry has a bright future.

Since Safran Korea launched not too long ago, there must have been some challenges it faced while trying to set up shop here.

Even though some Safran’s subsidiaries are well known in Korea (Turbomeca, Sagem, Snecma, Messier Bugatti Dowty, Labinal Power Systems), the brand Safran itself is still not very well-known, and a lot of Korean companies, or governments, are not aware that those companies were 100 percent owned by Safran.

However, our Group has decided to place all of its subsidiaries under a single banner and brand name – Safran – to bolster its position as a global industrial leader and accelerate its international growth. The Safran logo therefore becomes the sole emblem representing all Group companies.

Safran has taken a major step forward in terms of its brand image, for the benefit of all stakeholders: customers, partners, shareholders and employees. Operating under a single brand will enable Safran to further improve its recognition across all markets and publics in Korea. It will also guarantee the enhanced visibility of its businesses and the products and services it offers.

Korea and France have seen positive growth, especially between businesses. What is Safran doing to further bolster business partnerships between the two countries?

Safran already equips the three Korean Armed Forces with optronic systems, inertial navigation system (INS), helicopter engines and landing gears. Most of those programs have been conducted in partnership with local companies.

For example, we have a partnership with Hanwha Defense for INS, Hanwha Techwin for helicopter engines and Huneed for the helicopter flight controls.

In the field of security, Safran provides Incheon and Busan airports with luggage explosive detection systems.

Regarding civilian aeronautical industry, we also have some commercial plane engines flying in Korea.

Our relationship with Korea is not new and we are confident that given the potential of Korea and the capacity of Korean people to move forwards and progress, there are great things to do together in the future. We are only at the beginning of a fruitful partnership. 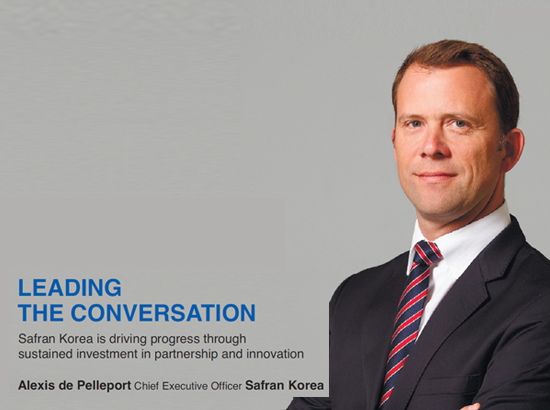 Posted in All News, ECCK in the Media, Members & Partners.
Share